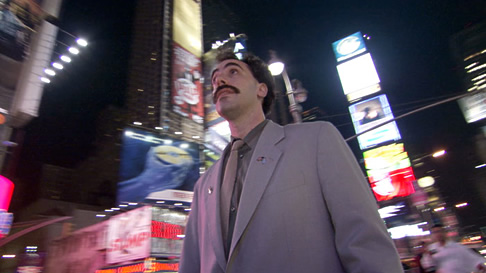 Last Friday night I went to see Borat: Cultural Learnings of America for Make Benefit Glorious Nation of Kazakhstan. This is the second time I have watched a film in a US cinema, so alongside my review of this film, I’ll also share some thoughts about that experience as well.

I remember Sacha Baron Cohen’s break out character—Ali G—when he started out on Channel 4’s 11 O’Clock show. Not only was it an original idea, but it was excellently performed and very funny. (It’s worth noting that a certain Ricky Gervais took his place when Cohen left to pursue bigger and better projects, and has also gone on to have success in America.)

When I first saw Borat a number of years ago, I always thought that it was a slightly weaker character than his Ali G creation, although by that time the Ali G idea had run out of steam—certainly in the UK.

After seeing the trailer for this film however, I was really looking forward to seeing Borat on the big screen, although people had remarked that what he was doing was pretty unfair. Having picked a relatively unknown country, and then promoting ideas such that it’s a nation of rapists who drink out of the toilet as fact, could be seen as very damaging. Personally, this didn’t bother me too much, but the publicity surrounding the film (holding a press conference outside the Kazak embassy) seemed to be taking it a step too far.

And ‘a step too far’ is exactly what this film felt like. Americans, women, gays, Jews; nobody is left from ridicule. Of those that deserved to be mocked, they certainly didn’t need Borat’s character to look stupid, as they managed that on themselves with ease.

I’m torn between whether Borat is a fine comedy creation with a commentary of our society as it’s subtext, or just an excuse for Cohen to be out and out racist. Yes he is Jewish, and in that regard is mocking himself and his religion, but I wondered how much of this was just a diversion from everyone else he mocks in the film. Regardless of this, I found the film fairly forgettable, and I spent most of my time trying to work out whether each scene was for real or a set up (some obviously were, which for me destroyed the entire premise of this film).

Finally, as I mentioned in the introduction, this is the second film I have watched in an American cinema. This is a totally different experience to watching a film in the UK, whose audiences tend to be more reserved. Here you will hear cheering during the trailers and at the start of the film, and roars of laughter as it progresses. The same was true when I went to see Talladega Nights, and having seen that film in the UK as well, I am able to draw these comparisons with a degree of confidence. Again I’m torn. Is such an atmosphere desirable? Yes this is entertainment, and it’s good that everyone gets involved, but at the same time, I’ve paid money to see a film, only for parts to be obscured by laughter in the audience.