Whilst I don’t want to over play my move to California, as soon as my feet touch the ground at SFO it almost feels as if the next era of my life is set to begin. So as the final hours tick away on this one, I want to pay tribute to three people who have become very important to me over the last four or five years. 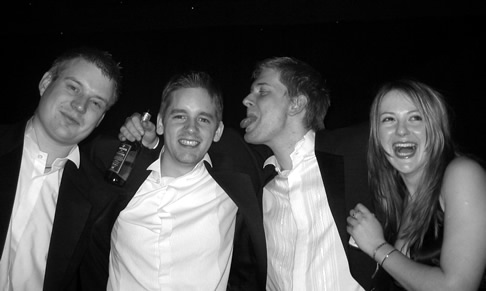 I got to know Kris Benbow soon after returning from university, when I decided to return to McDonald’s on a full-time basis. Some would say my return was a foolish decision (and looking back, I’m inclined to agree), but I actually look on this care-free time as perhaps one of the best periods of my life.

On my first shift back, I was shocked to find that this guy Kris had been promoted to manager. It quickly transpired that he considered his role more that of entertainment officer rather than floor manager, and made everyone’s shifts there much more enjoyable as a result, including my own.

As we both took extra shifts cleaning stock rooms and taking early morning deliveries, we quickly became good friends, and Kris a person I felt able to talk to about anything—although it usually revolved around one particular woman at the time!

In the intervening years, this friendship has seen trips to Wales (with alarming regularity), Torquay, and even the other side of the world. Whilst these day’s he seems only able to travel as far as the local pub, at least I’ll know where to find him whenever I return home, and I’m glad of that.

I have known Jon Roobottom for many years, but we only really became good friends thanks to our shared love of the web. Originally, Jon went to university to study electronics, and then virtual reality, before becoming more focused on web design. Unfortunately for Jon, he didn’t really have a design lead education, and his early attempts were perhaps unimaginative.

However, after two and a half years working as a web developer at design agency Trinity, he has built up an impressive portfolio of work. Indeed this, coupled with his passion for photography (with many shots that I think are just pure genius), I now look to him for inspiration and critique.

We often discuss joint initiatives and projects (a podcast is the latest thought). Whilst a number of these have failed to get of the ground, we did have one little success in the rdc theme, and it’s because of this, that I find myself at Ning today.

I don’t think I can mention Jon, without talking about his beliefs, that are large part of who he is today. Given that I am someone who moves between an atheist and just plain doubtful, I enjoy being able to debate this (and other) issues with him, which give me a greater sense of who I am, and where we all are.

Finally, it would seem he is starting to become a star in his own right, and you will be able to see him speak at 20x2 this coming November in London.

Last, but by no means least, my favourite lady friend! Again, like Jon, I have known Ellen Sanders since secondary school, but we only became really great friends since my return from university.

I also have Ellen to thank for my first kiss (although not passionate), which is one example of many which demonstrates her amazing kindness!

She is the best friend a grumpy old git like me could ever ask for, and indeed in these final few hours as I worry about things I shouldn’t be worrying about, she is there telling me to “live like there’s no tomorrow, love like you’ve never been hurt, and dance like no-ones watching”. Valuable word’s of advice I intend to follow.

If my life was a film, Ellen would certainly be the leading lady.

I didn’t want to finish this post without acknowledging all my many other great friends, who I am also immensely proud to know. All of you will be very much missed, and I look forward to many of you joining me in sunny California over the coming months and years. In the meantime, keep those Flickr streams flowing, the e-mail channels stuffed, and my Skype headset buzzing!

Regular readers may have noticed that this blog has become increasingly reflective, and indeed soppy over the last few months, and for that I can only apologise. I do however think there is some value in a blog as a personal refection of your own experiences. Hopefully in years to come, this will be a record of what was a great (and much needed) transition in my life… or, more embarrassingly, a load of old bollocks that came to nothing (but let’s hope not).

So here’s to the next few months, back to blogging about dodgy television adverts, old pairs of shoes and observations from across the pond. It has been said that I should blog more about living in California and what working at a ‘web 2.0’ company is like, and as much as I am able to do so, I plan on doing just that.

See you on the other side.

Previous The One to Watch
Next Palo Alto 94301