A lot has happened in the last year, and October seems to be a month for celebrating anniversaries.

On the first of this month, the Multipack reached the one year milestone, having had a successful 12 months, adding 83 members to the original four who met up in Walsall a year earlier, and hosting the first annual Geek in the Park in August. The beginning of October 2005 also saw the public unveiling of Ning, and before the month was out, I started my relationship with this company.

This local web community was founded by Simon Jobling a few months after he attended @media2005 and discovered that a number of web developers, who were also interested in web standards, lived locally.

Si thought it would be a good idea to start a community that brought these people together, allowing us all to share ideas, knowledge, and act as an excellent excuse to go to the pub and socialise with new people once a month. 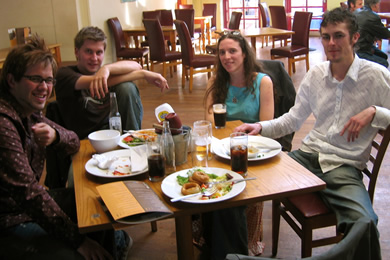 I attended the very first meeting, and was therefore able to have some early input into the founding of this little organisation. Since then, and with the help of a host of others, the community has really taken off. With a website, active forum, yearly organised event (that’s free to boot), positive media coverage, as well as monthly meetings around both the East and West Midlands, it’s easy to see that the Multipack is going from strength to strength.

Now seems like a good time to publicly thank Si for pulling us all together, arranging those early meetings and his continued effort in driving the Multipack forward. It’s thanks to this group that I now have a whole host of people I can talk to and get all kinds of nerdy advice from, and I think that’s fantastic!

A platform for building social web apps, Ning officially came out of ‘stealth mode’ on the 3rd of October 2005. Later that month, I got the following e-mail from Gina, the CEO:

I’m a fan of your blog and I wanted to know if you were available for freelance work at the moment. I have a number of projects that need someone with your wonderful visual sensibilities…

The rest as they say, is history. Since that first e-mail, nothing has really been the same. I can remember the first few months working as freelancer for Ning, and being offered flights out to California for a week, and then the offer of a full-time job in the States. At a time when things at Orange Vision were starting to go a little pear shaped, this opportunity couldn’t have come at a better time.

In that year, we’ve achieved a lot, but I think it’s fair to say that Ning still isn’t the product many of us want it to be, especially when you understand it’s full potential. Personally I think we may have lost our way a little this year, and that’s been really frustrating at times.

However, from this we have learnt a lot of valuable lessons, and right now we are in the initial development stages of something that could be really exciting, innovative, and more importantly, closer to the sort of experiences that should be seen on the platform (and indeed the web). I think you’ll definitely be reading a lot more about the company next year, so keep a look out.

Of course, regardless of the product, being around such a talented bunch of people is a fantastic learning experience. I’m now joined by a fellow web developer and user interaction guru, to which I can hopefully learn skills that are infinitely more useful to me as a designer (seeing cool Java and PHP is great, but I’m never going to be a programmer, so such wonderment is wasted on me!)

It will be fascinating to see where all these things are in another 12 months time, and where I will be also. I somehow don’t think the change will be as drastic, but in the last year I’ve come to accept that anything can happen, and it invariably does!