Looking back, 2004 was a year of two halves, and after reading the following, a thesis of the year 2004 almost, it doesn’t take a rocket scientist to work out which half was more rewarding (the absence of Mark and Lard being the only exception).

For me, 2004 began still very much on the come down after the highs of my Australian visit only a month beforehand.

In January, it was suggested by Aimeé that the old gang from my Sixth Form days should meet up again. Seeing as many of our friendships had embarrassingly disintegrated into the yearly Christmas card this couldn’t have come soon enough. A ‘reunion’ was arranged and January saw me, Jon, Dan, Stacy, Aimeé and Sarah get together for a drink and then bowling some weeks later. However, the time that had passed seemed to show and these first encounters seemed awkward.

For Kris and Jon, 2004 started off with new challenges. Kris became a ‘Marketing Executive’ at Keltruck in West Bromwich—a job that I understand requires little qualification aside the ability to source a wide range of biscuits, race golf carts and knowledge of Microsoft Paint!

Jon soon followed in March with a job at Trinity Design in Sutton Coldfield as a web developer, a job which has seen his design skills follow a continuing upward trend. He also became a Christian, which for him is maybe the biggest decision of his life. Lee and Lyndsey also decided to get married, and more worrying still, asked me to be the best man.

Kris was coming to terms with his arrival back on British soil after a respectful 4 month drinking binge in Syndey with the resolution that every month in 2004 would see him and some friends take on something mildly dangerous and adventurous. Our first (and indeed only) adventure of this type saw us visit Holyhead (purely because the A5 ended there) before some fairly safe abseiling, rock climbing and an episode of Britain’s worst driver in Llangollen, North Wales. 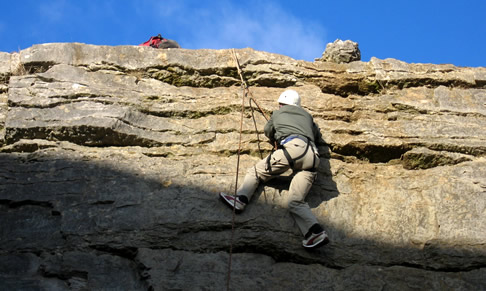 It would seem Kris was full of ideas, and on a short lived health kick, came up with another—that of learning a martial art. In March this saw me, Kris and Lewis (later replaced by Lee and then, more recently, Ellen) take up Kung-Fu, and both achieved our 1st Cup, White Sash. I also found the inability to move my legs every Tuesday morning! However the other part of the healthy living plan—the weekly visit to the Gym soon became the weekly chat whilst getting mildly damp in a swimming pool. But as they say, one step at a time…

Time to Move On

With both Kris and Jon now enjoying permanent employment in April, Jon began to enjoy driving again (his Rover 214 sold on eBay for £50 and replaced with an Astra 1.8 Sport) and Kris exchanged his car for a ride-on hairdryer (or MX-5). Suddenly I had realised, that I was still working at McDonalds, and had been for nearly two years since leaving Carlisle. Where had all that time gone, and why-oh-why was I still working at McDonalds? A job search quickly began, whilst the shifts became longer and more tiring, and my temper got shorter and shorter.

An interview in Warwickshire for a job that would require over an hours drive every morning and evening just shows how desperate I had become to leave Bescot. But there was only ever going to be one way I was going to leave, and that was to quit.

Thankfully Franks wisdom was proven wrong, and quitting without having found a new job was in fact the right decision. So right in fact that during my period of notice, I found my current employment as a Web Designer at Orange Vision in Lichfield. Should they have known that I was in fact a member of the church of Macintosh, totally opposed to PC’s, table based design, Microsoft, Asda, Christmas… in fact most things, they may have thought twice!

It seemed as if the air of change had reached Orange Vision too, and a massive chapter in the companies history took place shortly after my arrival, moving across the road to bigger, more expensive, and now infinitely wooden floored premises.

With work now confined to the hours of 9:00-5:30 (or more accurately 9:32-6:05), this seemed to coincide almost perfectly with many nights out during the summer months with an enlarged, merged group of friends. Birthdays for Sarah and Stacy were two examples of celebrations without any of the awkwardness felt earlier in the year. Perhaps this was helped by the fact that Lee and Kris came along for the ride—although Lee’s right shoe didn’t always make the full distance.

Should I even start to mention Euro 2004—needless to say it was the same old highs, the same old penalty taking lows. 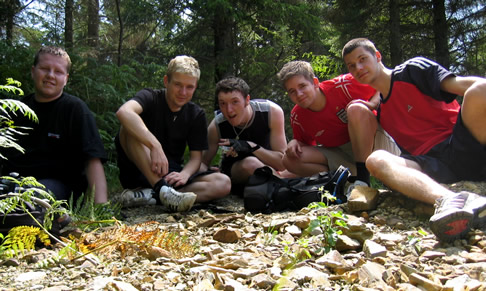 Being nearly a full four months since our last trip there, it wasn’t long before another trip to North Wales was on the cards, this time Coed-y-Brenin for the famed, almost yearly mountain biking weekend. The shear hell of having to ride a woman’s bike around the Red Bull Mountain course meant that my first pay-cheque was only ever going to be spent on a new bike — and arguably with better engineering than that of my car. A trip to Torbay came in August, yet I can’t remember why!

September saw some sporting activity, namely drowning, twice, in the River Trent care of my new employers (perhaps by this time realising my hatred of PC’s, table based design and Microsoft…) and another attempt at the Great North Run. Having achieved the same time as the year before, set against a 500% decrease in preparation for the run (read that as none what so ever) I tried to look on it as an improvement, before realising that I had spent hundreds of pounds in the process and not raised any money for charity. Must try harder.

Change really was becoming the buzz word of 2004 — but sadly this was not a happy experience for everyone. Ellen had returned back home to Walsall after leaving London where she was living with her boyfriend. October saw me catch up with her, and although plans to dress up as a rabbi and gatecrash a future Jewish wedding are on hold, joining me and Kris for Kung-Fu has proved a fun, yet dangerous concept. Even here, things have perhaps changed for the better, with a new job for her to look forward to in the New Year. 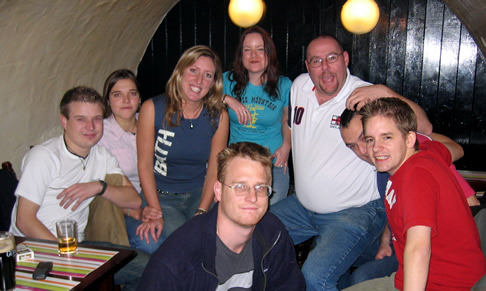 November saw an ‘unofficial’ reunion with most of the people who I had met and become friends with during my stay at the Glebe Village hostel in Australia. The plan was to watch some Rugby in Bath, but to be fair this was never going to happen, and with Dangerous Dave having to dodge bullets to join us, we all ended up on a mini pub crawl before heading over to Bristol.

Here we continued the drinking in the Walkabout Bar, and this night easily achieved the best night out of the year award—so cheers guys. This was then repeated again in Wimbledon, South London in December, this time with everybody in attendance. This included Johnny who flew all the way from the US—joining John Kerry as the only other American I would like to have seen more of this year. Well done that man! 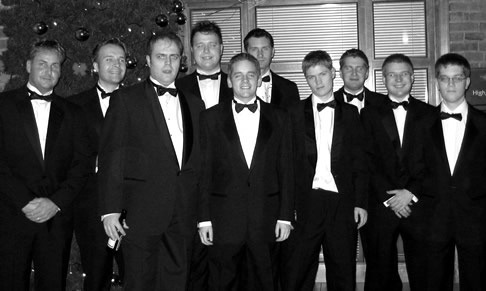 With December ending with the Orange Vision Christmas Party that, thankfully, ended without embarrassment (perhaps some thanks should go to Simone and hotel bedroom arrangements!) this became the highlight of the whole Christmas period, and a brilliant and fitting end to the year.

Most Enjoyable films of 2004

During this year Keane sung Everybody’s Changing—if this year was to be a film this would definitely be the soundtrack. Me, Jon, and Kris all found ourselves on our chosen career paths—mine after being side tracked for far too long. Friendships were rekindled, seemingly not a month passing without meeting back up with a face from the past. Even friendships that I had almost destroyed during the madness that was the beginning of the year are now back to full health, and most importantly of all, I am happier than ever.

It seems ironic, but already these seem to be all to ready to pale into significance as 2005 promises much much more—a new house being perhaps the biggest of which I can mention, but other much larger, perhaps life shattering changes seem all to ready to show their faces in the coming year. But unlike this time last year, I can’t wait to start 2005. Watch this space, and enjoy the ride!

Tagged: Review of the Year