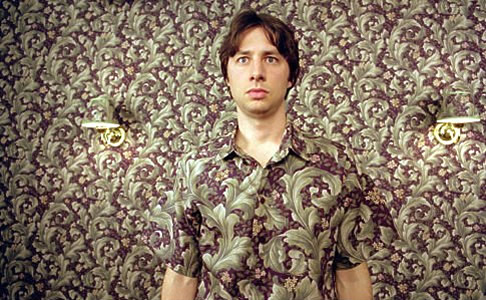 Never before have I waited with as much anticipation as I have for this particular film. I don’t know why. It was only whilst browsing the movie trailers in iTunes that this particular film was singled out for suspending the boredom. But from that single viewing, I have waited seemingly forever to see this film.

So to the story. Braff plays a jobbing LA actor who returns home to New Jersey (the Garden State) to his mother’s funeral. Whilst this sees him meet up with some old school friends that he hasn’t seen since leaving them behind almost a decade ago, it also becomes an opportunity to take a break from the lithium induced ‘comma’ he has been prescribed to by his father (Holm).

During this awakening, a chance encounter with Sam (Portman), opens his eyes up to the possibilities that life can present, including love. Alongside friend Mark (Sarsgaard) the three go on a journey through the strangest of locations and situations—a meeting with a hotel porter (played by Method Man no least) being one particular highlight.

This film was most definitely worth the wait.

If not for the fact the film is so refreshingly unpredictable, genuinely funny and surprising, then maybe it’s down to Natalie Portman convincing you that you fancy the pants of her. The soundtrack is just amazing too, and one of few films where I would like not only to buy the DVD but also the CD.

However, it’s real appeal may be just the films blatant originality. Compared the usual toss we get thrown at us at the multiplexes (no surprise we had to find a small independent theatre to see this) it was a real breath of fresh air. In turn this film has inspired me to seek out more films of this ilk, and awaken myself from my own Hollywood induced comma.

Previous Back to Bedlam
Next 2004 in Review