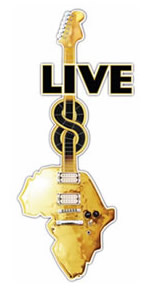 You’ve no doubt heard the statistics—over and over again. We live in a society where such figures have become background noise. ‘More important’ issues take precedence; should I buy a 50 or 56 inch plasma television? How long before I can afford a new Apple Cinema Display to go alongside my swanky new G5? How will we afford this months mortgage repayment…

I guess that’s where Live8 came in. As one of many MakePovertyHistory events this year, Bob Geldof has helped bring this noise to the foreground (very much noise in the case of Velvet Revolver…!). It’s a shame that this, and other events throughout the year are needed for us sorry lot to ‘buy into’ caring and to take notice, but maybe now our ears have been pricked—they should stay that way. Awareness is the key.

What you can do

It may be difficult, but of all the 52 weeks of the year, this is the one week we should really be paying attention to what’s happening around us. Here’s a few things you can do this week to become part of the solution, and not part of the problem:

Previous Reflecting on @media 2005
Next Pride