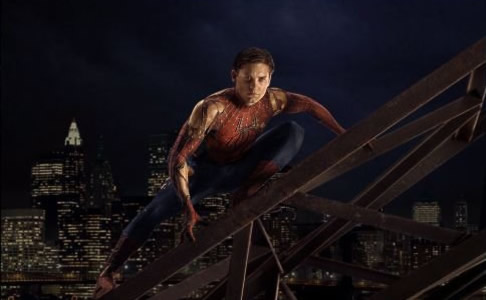 One of the big releases of 2004, and already a huge success worldwide—but this could be said of many films that Hollywood throws at us. However the Spiderman franchise has a good reputation to preserve, and as sequels go, this does the job.

We join Peter Parker a few years after the first movie left off, and at a time of personal crisis. Whilst saving the world is good to put on your CV (or not if your a masked super-hero), his relationship with the love of his life Mary-Jane Watson (Dunst) going down the tubes.

At the same time, Professor Octavius (played rather brilliantly I felt by Alfred Molina) is having a go at cold fusion with the help of a four armed appliance with artificial intelligence—never a good idea in a movie such as this!

While the film does seem to bang on relentlessly about the choices Peter Parker has to make, there are some great comedy moments thrown in, riding down on the lift being one of them. There are also some nice surreal sequences—cue the soft light effects/slow-motion or Burt Bacharach’s ‘Raindrops Keep Falling on my Head’ played over footage of a jubilant Tobey Maguire. It’s cheesy, but it works.

Where the film falls down though is in it’s plot. For a comic character that hardly ever revealed himself in 30 or so years of comic books, this happens all most far too often in this movie. Even better is the point at which a helpless Harry Osborn strikes a deal with an eight-limbed freak who could get what he wanted without any trouble.

All together a good action movie—but as good as the first? I find it hard to see how.