A few weeks after my stay in Montreal, I spent ten days touring New York and my home town of San Francisco with my good friend Ellen, who braved the long flight over the Atlantic to come see me in America.

We spent the first four days in New York City, a city I had only briefly encountered last November. During our time there we walked around Greenwich Village, took in the sights and sounds of Times Square, Wall Street, Fifth Avenue and Central Park, sailed on the Staten Island Ferry, watched a Broadway show (the excellent Frost/Nixon) and spent an afternoon in MoMA. 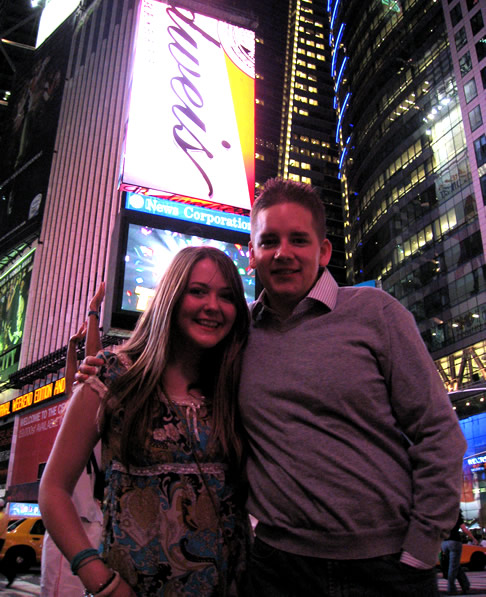 We didn’t just want to do all the touristy things, so for our penultimate day in the ‘Big Apple’, we took the subway over to Coney Island, a part of Brooklyn famed for it’s boardwalk and fairground appeal. We quickly became disorientated as this seaside town felt a thousand miles away from the rest of New York.

After exiting the subway tunnel, we looked over a landscape much like that of North London, but as we got closer to Coney Island, it started to look more like a country from the former Eastern Block. Perceptions were skewed still as we walked down the boardwalk. On the one end you had the roller-coasters, Ferris wheels and of course ‘Shoot the Freak’, but as you moved east, these changed into nice apartment blocks supposedly home to the Russian Mafia—and I think we bumped into a few of the them!

A touching moment during our time in New York, was meeting a real New Yorker, who chatted to us whilst we sat next to the John Lennon memorial in Central Park. This pleasant old man, told us about how he had met Yoko Ono (and that she is really quite a nice person, happy to talk to visitors of the memorial), his time spent in Wales where he was stationed before the D-Day landings, and how he had used to go for breakfast in the World Trade Center. This was a guy who had seen it all, and was absolutely fascinating listen to him talk about all these events and more.

Other notable mentions - finding ourselves on the set of The Happening (M. Night Shyamalan’s next film), a lovely Korean meal with David and Susannah, the funny old man in Esa-bagel (comedy in a bottle), and the school kid on the Coney Island boardwalk, who happily told his friends that seagulls were vultures, that not only eat humans, but also their own kind.

I was surprised by just how hot it is in New York around this time of year. Unlike San Francisco, there is no breeze in Manhatten, and so the heat just clinged tight and it all felt very sticky. Whilst it was great visiting New York again, it has a certain aggressiveness to it, which we were happy to leave behind as we travelled on to the more relaxed west coast.

We arrived in San Francisco Wednesday night, where I was able to introduce Ellen to my two flatmates, Tom and Gerir who were very gracious in allowing Ellen to stay.

Just as we had in New York, we covered a lot of ground in a short amount of time: the Golden Gate Bridge and Park, Fisherman’s Wharf, Union Square and the mission district, practically using every method of public transport available to do so.

Thanks to Nancy, we were able to visit Monterey, Carmel and Santa Cruz, and thanks to Dan and Liz, Sonoma for a little wine-tasting on the Sunday. I was afraid we might not be able to escape the confines of the city, but thanks to these guys, Ellen was able to see far more of what California has to offer (and I was able to get a tan!).

On our last day in the city, we took a tour of Alcatraz and Angel Island. Alcatraz is a really fascinating place, although I’m not sure I was able to take it all in during the one hour we had to spend there, before we set of for Angel Island. This large island in the San Francisco Bay is not that well known, and feels miles away from the rest of the city, almost like a tropical paradise.

In fact, I discovered a lot of new places and experiences in this city I’ve lived in for 6 months now, and I’m grateful for that. Having said that, in the 6 days Ellen spent in California, we practically visited all of the places I had seen in the previous year, so not bad going!

It was great to spend some quality time with such a great friend, so a big thank-you to Ellen for making the trip over.