Crash is a story about several racially and socially divided individuals living in Los Angeles, that through a number of events over the course of two days, come in contact with each other with predictable and unpredictable results. 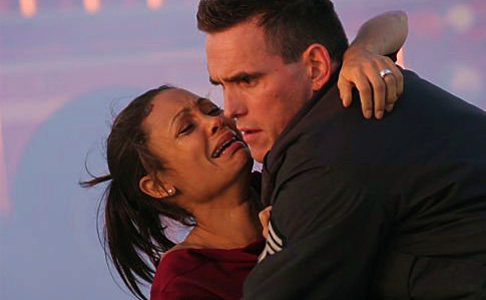 It’s the sense of touch. In any real city, you walk, you know? You brush past people, people bump into you. In L.A., nobody touches you. We’re always behind this metal and glass. I think we miss that touch so much, that we crash into each other, just so we can feel something.

Directed by Paul Haggis (creator of Due South—one of my favourite TV shows of the mid-nineties), and with a stellar cast (Don Cheadle, Sandra Bullock, Thandie Newton, Ryan Phillippe, Matt Dillon) this film is beautifully shot and narrated, and really grabs hold of you and your emotions.

Ryan Phillippe’s character (Tom Hansen, a fresh faced police officer) is particularly interesting to follow as he becomes a sort of moral compass that guides you through the film, as your perceptions and ideas about every other character are completely altered. Ultimately, and in the final moving and heartbreaking act, even your impression of Tom is shattered.

If you haven’t seen this Oscar winning film yet, I suggest, in fact, I beg you to do so as it’s one not to be missed. I will certainly be watching it many more times in the coming months and years.

Previous Flags Of Our Fathers
Next Children of Men