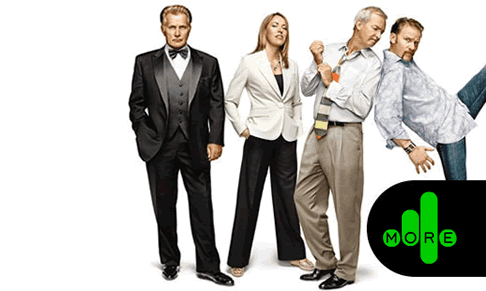 If you have Freeview turn to channel 13 now! If you have Sky turn to channel 165. For cable viewers, tap 166 into your ntl box or 142 if you’re with Telewest. What you shall find is a preview for what I believe to be the most exciting television channel to launch since BBC2 forty years ago.

More4, which launches on Monday 10th October, is what Channel 4 are calling ‘Adult Entertainment’ — perhaps not a very precise description. I like to think of it more as ‘what television should be’.

It launches with a prime-time slot for the West Wing, even more Channel 4 News, The Daily Show with Jon Stewart, the UK Premier of Downfall (been wanting to see this movie for a while now) alongside re-runs of other great programmes shown on the parent channel in the last few years (Grand Designs, Bremner Bird & Fortune, Jamie’s School Dinners etc.).

Basically this is a channel after my own heart, confirmed by what looks like a really well executed identity and presentation package. I should also mention an increasing consistency here between Channel 4, E4 and More4, which was missing for a long time. Now all of Channel 4’s output looks like it’s coming from the same place.

It’s just a shame that this ‘adult’ programming is getting increasingly pushed onto the sidelines in these new multi-channel environments (BBC Four is another example). It would seem that the ‘main’ channels are devoting more and more of their schedules to the soaps, reality TV and proven programme formats — i.e. more of the same.

ITV is the prime suspect in this respect, going all out for proven ratings winners, without giving much of the schedule over to other types of programming. Their soon to be unveiled forth channel just seems laughable given the current state of ITV2 and ITV3, and recent 50th anniversary celebrations have only gone to show how unimaginative and bland the network has become.

So while I applaud the launch of More4, I’m not sure I like the direction television is taking. By moving thought provoking, interesting and entertaining shows onto other ‘specialist’ channels further down the EPG, great series and shows are not being given the bigger audiences they deserve.

Is this the beginning of a dubbing down of television or is it perhaps just the start of television becoming an on-demand medium? What do you think?

Previous My Greatest Run (Part 2)
Next The 'We' in Web