A Summer to Remember

If there are two things that I can count on during any given year, they are non-eventful summers that seemingly end before they start, and the annual hell that is my birthday. This year, thankfully, it’s all been a little different!

This sudden change of fortune nearly didn’t happen however, and it’s perhaps only in the last two weeks at the tail end of summer, with a Glebe Reunion in Bristol, three days in a hot and sunny Newquay and my recent birthday celebrations, that Summer 2005 currently tops the charts.

Another reunion, this time back in Bristol to celebrate Ange’s birthday. We all met at her new student residence with its excellent hostel like shelter in the back garden that would host the usual drinking games and a BBQ prepared by Nick. It was just like being back in Glebe Village and this setting, coupled with the weather made for an enjoyable Saturday afternoon.

The night was spent in the local pub before heading back for a game of “Battle of the Sexes”. By the time everyone had decided what the forfeit for losing would be (an hour later) most of us were already falling asleep. Apparently the eventual outcome was that the lads lost, but only due to underhand tactics from Ange and Alice!

After a bit of breakfast the next morning, so another reunion had ended. I think it’s fair to say that me and Kris arrived in Bristol with low expectations for this second reunion of the year, but looking back it seemed silly to doubt that much fun would be had!

For the last bank holiday of the summer I headed down to Newquay with my brother and his friend Rich. 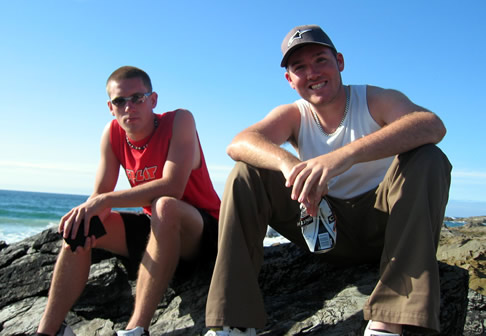 Having not booked any accommodation we hoped that this wouldn’t pose too much of a problem, although I had my doubts—somewhere to stay during a bank holiday weekend in Newquay—no chance. I was bang wrong and the first campsite we found was not only cheap but had beautiful women all over the place—it really was a sight to behold!

Setting our tent up late Friday night in cold and slightly damp conditions, I was praying for the weather to turn out as promised.

We woke to an overcast Saturday that would see us walk about 2 miles into town (we seemed to miss every bus). Most of the day was spent in a pub having the first of many deep and highly intellectual discussions that you should expect when on holiday with an anti-capitalist and a sociologist. Later that evening we sat down to the first of many fine meals (we may have been camping, but we ate like kings!) before later hitting the town’s many bars and clubs.

Luckily Sunday lived up to its name as the sun came out in force—perfect weather for surfing on Fistral beach. However I was careless and got very burnt—not clever kids. It was so good to have sand between my toes and get in the water, for the first time since being in Sydney in 2003. That night and the good food continued with a carvery at the local pub.

Monday and a bit of shopping matched with more beaches, more sea, more fine food (pizza) before regrettably having to return home. All in all, the weather pulled out all the stops and gave me the much needed opportunity I needed to relax and get away from it all. Fantastic!

The Best Birthday Ever

I tend not to make a fuss of my birthday which inevitably leads to disappointment. But this year after a night out with Ellen we decided that it would be cool if she arranged a night out for me, which would also be a perfect opportunity for her to meet back up with everyone from school after such a long time.

I choose the Arcadian in Birmingham as somewhere I’d like to spend a night out, and after phoning round it was decided that it would be a belated celebration the first weekend of September. 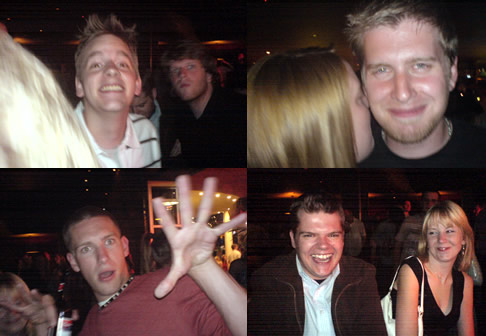 In the end I was to arrange the nights activities, and my brother suggested getting tickets for the Glee club, which turned out to be a great call. Of the five performers, all but one were brilliant entertainment, and a great way to start of the night. Lots of drinking, matched with comedy, great location, and most importantly a whole gang of great great friends. Thanks to Ellen’s birthday present, I was also fashionable!

This was quite simply the best birthday I have ever had, and a big thank-you to everybody for coming—particularly Jon and James for driving us all there and back. From what I’m hearing everybody enjoyed themselves as much as I did. Somehow I think next year I won’t be feeling so reluctant to go out and celebrate!

Previous Lee Nash Gets Mobile
Next The Art of Podcasting